In part 2 of this B-BBEE and Democracy Series we stated that the Constitution of the republic is the coolant system of the economic engine, without which the country has the potential to overheat because of persistent poverty, inequality, and unemployment. We also emphasized the need to clearly define what transformation is and the role of different sectors of the society. The Constitution remains a point of contention today, for the intended promise of a better life for all has not yet been realized in the country.

In the words of Lot Ndlovu, “the new economic dispensation should match the aspiration for economic freedom and the fulfilment of the highest ideals of our democracy.” The aspirations of the black majority need not be side-lined in the new political order we enjoy today. The economic dispensation has not fundamentally shifted towards the black majority, instead the economy remains in white hands in the presence of a black government. The aspirations of black people should be elevated throughout society, and this is not wrong to do, but it is an ethical requirement. It is an ethical requirement because black people have been systematically excluded in fully participating in the corridors of economic power.

The Black Management Forum published a paper to base their argument for economic freedom at the Truth and Reconciliation Commission. The BMF argued that business and politics have a relationship of convenience that mutually benefited the agenda of apartheid. The organization further stipulated that nothing existed in separating business and politics and in fact agreed on the project of apartheid. Business became the implementer of subjugation and the suppressor of black talent in the economy. Black aspiration could only progress at the mercy of white and corrupt leadership, which was evidently bereft of humanity and ethics. This white leadership created business leadership that had little regard for ethics and good governance, hence the current system still suffers from unethical behaviour and lack of trust in business. The very existence of the Competition Commission today is testament of the kind of inbuilt leadership behaviours. The Commission has uncovered collusions, price fixing and questionable competitive behaviour in the economy. This is as a result of the foundation built by the apartheid system in the economy. Therefore, business remains a powerful force in society, for they are the only ones who can override your grounding as a leader and present a different set of rewards for your attention, even when the means cannot justify the end.

Black Economic Empowerment therefore hinges from what Lot Ndlovu stated about the new economic order matching the aspirations of the people and enhancing the ideals of our democracy. Transformation is a system on its own, that supplants any other order that exists. Transformation is currently seen as a hindrance to economic growth, and not even as an enabler to economic growth. The government remains timid in standing firm on the need to make transformation a system that is entrenched in the very fibre of the economy. The public sector currently only complies with B-BBEE at 10%, according to the National Trends on Black Economic Empowerment Report. The lack of exemplary leadership by the public sector affords the private sector space to make transformation a secondary objective, when in fact it is a moral imperative justified by our collective history. The JSE only complies by 43% with B-BBEE requirements, which is higher than the public sector.

B-BBEE therefore must be championed as a framework that has the potential to reshape our society for the better. The framework currently has five elements, namely, ownership, management control, skills development, enterprise and supply development, and socio-economic development. The detractors of this framework spend their energy speaking against ownership and all the BEE deals that have been concluded over the years. These detractors and apologists reduce this framework to political elites and not the moral imperative of transforming the country. All five of these elements talk to the aspirations of black people, where in they must own, control, and manage the economy. Skills development and management control are the key levers that need more focus moving into the future, for management control is the heart of any economy, it carries the day-to-day decisions that shape the economy and its resources. Therefore, more needs to be done for black people to control management as we work towards the ownership element. The government has taken a decision to introduce sector targets for employment equity, which needs to be speeded up for the benefit of the economy. This crucial lever of the B-BBEE framework will unleash the other critical elements because black leaders will have decision-making power. The skills development element needs more focus on how businesses can invest in skills that will be utilized in the economy. The skills that will be invested in need to follow the key economic drivers of the country, underpinned by an ongoing national capabilities audit. Research and development outcomes will greatly assist the skills development trajectory and how the country can restructure its economic system.

Black people need not lower their standards in the economic arena, they need to dream beyond what is seen. The future of the country lies in the development of black leaders and managers and supported by a government that is unapologetic about lifting black people out of the doldrums and clutches of poverty. Black economic empowerment is therefore a moral imperative, not just a national project. Our future is buried in and will live through black economic empowerment. 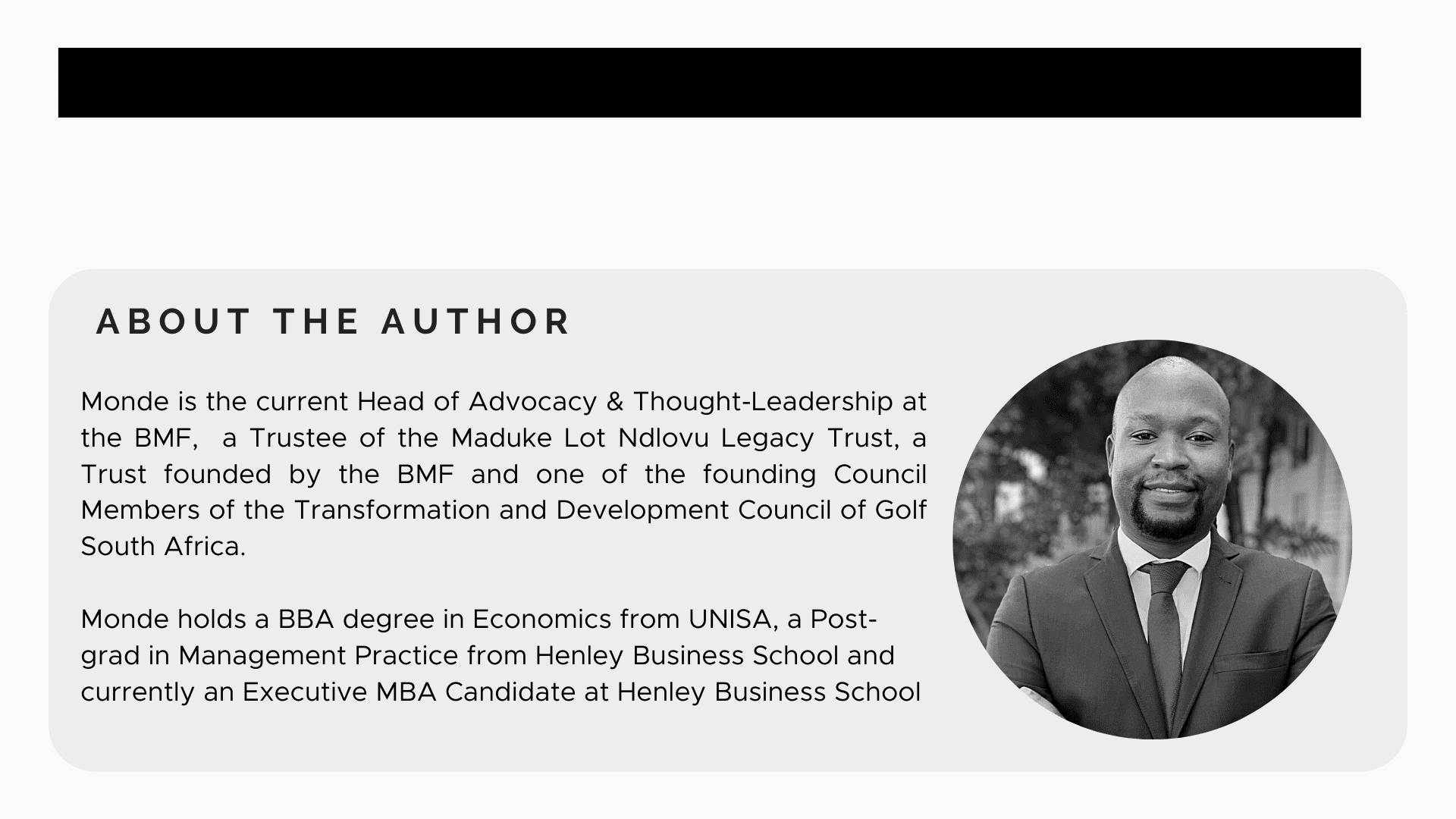 We are sorry that this post was not useful for you!

Please confirm you want to block this member.

You will no longer be able to:

Please note: This action will also remove this member from your connections and send a report to the site admin. Please allow a few minutes for this process to complete.

You have already reported this
Clear Clear All